What are those T-shaped concrete structures south of County Road 46?

During World War II, the U.S. Army operated a munitions facility at what is now the Rosemount Research and Outreach Center for the purpose of manufacturing smokeless gunpowder for the war effort. The facility was called the Gopher Ordnance Works (GOW). 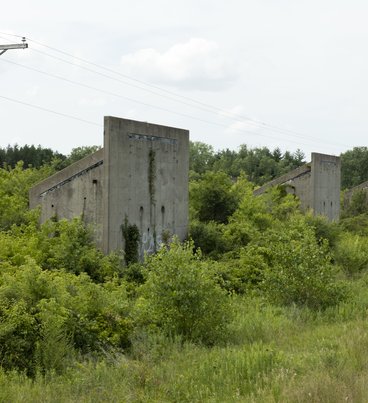 The concrete structures along Dakota County Road 46 are loosely known as the "T" wall structures; they offered the primary support for solvent recovery buildings. These buildings were known as the 214 Solvent Recovery Houses. They functioned to remove and recover solvents (diethyl ether and ethanol) from the "green" smokeless gunpowder. The solvents were removed and recovered through a temperature control process.

Solvent recovery cars containing "green" powder were filled in the vertical press house immediately north of the solvent recovery buildings. The enclosed cars (one car per side) were connected via hoses to warm air derived from steam lines to the buildings. Air was circulated through the car at 30° C. The temperature was increased at 2 degrees per hour until it reached 55 C. When the process was complete, the temperature was dropped to 25° C. The car was disconnected and removed to the water dry house for further solvent removal by water washing. The solvents were collected in solvent recovery receivers underground. This solvent mixture then underwent gravity separation and was re-distilled for reuse.

The University of Minnesota, together with the Dakota County Environmental Management Department, is currently working with the US Army Corps of Engineers to evaluate and assess the property for possible remediation. We are just starting the process and expect the investigation to take several years. The fate of these and other structures on the Research and Outreach Center property will depend on the land use proposed for this property.